It was these plates which Cowdery, Whitmer and Harris saw, while those “with the appearace of gold” were seen by other members of his and the Whitmer family. They reflect the family Bible with its family history and gold or brass sheen. Smith’s golden plates simply do not exist.

No other prophet in ancient Yisra'el or Yehuwdah knew both Egyptian and Hebrew, since there was no point. Even though for a time the king was appointed by Egyptian overlords, after the battle of Carchemish in 605 BCE king Nebuchadnezzar of Babylon assumed that role (2 Kings 24:7 contradicts 2 Chronicles 36:4). The Yisra'elites were forbidden to return to Mitsrayim and have a king with multiple wives (Deutoronomy 17:14-17).

What point, too, was there in learning its hieroglyphics, since each hieroglyph has to be interpreted in its context, whereas Hebrew can be translated?

Precisely where Lehi worked in that great city Jerusalem is not specified, yet he was quite wealthy. One might guess that he received an ample Egyptian stipend for working at its embassy and be close. Who knows, since he never existed.

America The Land Of Promise?

How interesting that there is no mention of America in 1 Nephi. Yet the name of Joseph, son of Joseph (Smith, Sr.), who both lived in America, were supposedly known to the patriarch Yowceph just under 3,800 years earlier, while America was not (2 Nephi 3:15). Clearly it is all about the name Joseph. It helps when things come in threes.

Important points are never revealed, only whatever feeds the ego. What happened when both Josephs turned seventeen?

So, according to the all-knowing prophets Lehi and Nephi, the “land of promise” has no name. It is presumed that they journeyed to America, yet the destination could be the Malay Peninsula where at least elephants existed and maybe the mythical cum(m)oms and cureloms (Ether 9:19).

Two families, actually the Smith and Whitmer families, purportedly crossed the Indian and Pacific Oceans "after the space of many days" experiencing only one severe storm during which Nephi was bound for four of them. After that the weather was put on hold just for him. Nephi was so precious and righteous in the sight of the Lord that God would do anything to please him, even give him plain sailing for months. It never happened.

Eight Years In The Wilderness?

The ship scene is about getting all the family on board. Families like to take cruises together. The eight years in the wilderness was from 1815 to 1823 when the eldest son Alvin “the carpenter” died of mercury poisoning. He was the only member of the family with his head screwed on right.

In the narrative Alvin is Laman and Hyrum is Lemuel, which means "belonging to El". Once free of his older brother's control, Hyrum was convinced to join the family, hence the saying "being on board ship". Nephi's was a magical ship, not built after the manner of men (1 Nephi 18:2), like the apostle Paul’s false gospel (Galatians 1:11-12).

During this period they lived in the family 'tent' or primitive cottage at Palmyra in Wayne County, New York. Building a new residence on their own property was already under way in Manchester just over the border in Ontario County. Organising this fell to Alvin. His death left a huge hole. 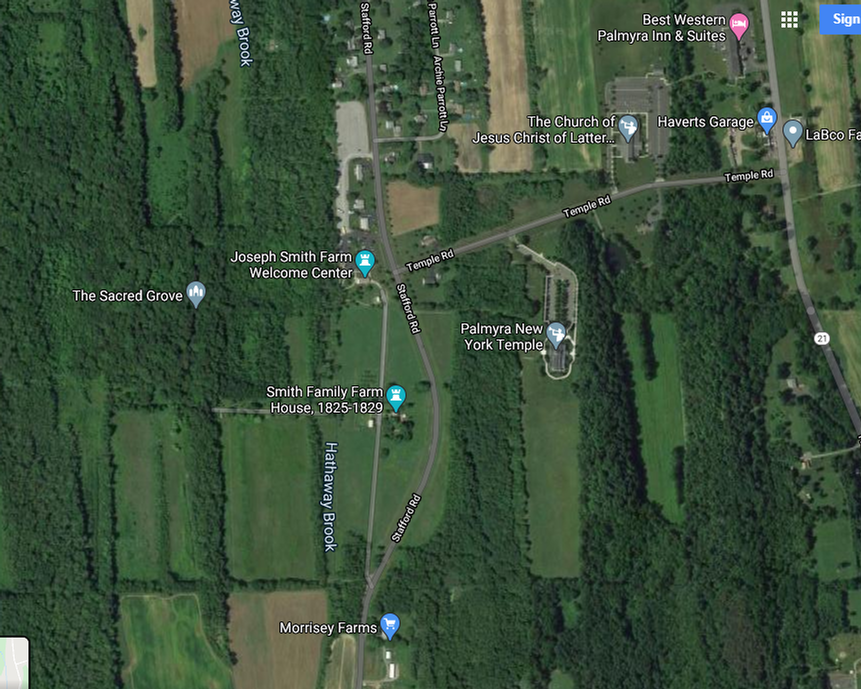 Examine the Google Maps satellite image above. The River Laman is the Hathaway Brook running through the farm between the house and grove of trees. Where in the wilderness of Israel's Negev is such a river and a valley called Lemuel, so named by Lehi, which has all manner of seeds of plants and fruit (1 Nephi 8:1)? Is such exaggeration acceptable?

The Negev is mostly barren wilderness. Does wilderness perhaps mean uninhabited by man? Did not the farm property have to be cleared of trees? So it was wilderness after all. Yet read about the scarcity in 1 Nephi 16:35. Lean years are not uncommon in farming communities. Indeed Joseph Smith, Sr., left Sharon, Vermont, for Palmyra after a series of crop failures and also for safety reasons.

Here is the big question. Why did they not discover the bleeding obvious on their way through, namely, Terra Australis or Papua New Guinea? They sailed in a 'ship' built using magic wand technology by a lad who, from his own account, was raised in the "great city of Jerusalem" where every person of means had a boat and a tent, just not the family of Ishmael. But wait. Was not Zoram on board?

Consequently there is "another story" behind that book. Although none of it is historical  - it just seems that way  - it is nonetheless a very cleverly written piece of Christian fiction by a father and closet homosexual son, now bi-sexual since he is married, who killed the church elder who raped him in the grove of trees and warned him not to attend his church, but create his own instead. Words sometimes make a big impression. The elder’s name was Thomas.

One might ask why no one has picked up on this, either within the church or as a gentile, during that period and since. Closet homosexuals tend to be discreet with their sexual behaviour. Furthermore supportive parents generally respect the wishes of their son or daughter. Kept well hidden, no one even thought to ask. Out of sight, out of mind ensured no Zoram would ever discover it.

Surely Joseph Smith, Jr., was a man ahead of his time. Might it be true, then, that the church he and his closet friends created on April 6, 1830, at the start of the weekly '12/13' Thrones module is legitimately the religious environment for those who enjoy gay sex?

'12/13' (Yaqim-Chuppah) tends to emphasise the feminine aspect. It is one of two matriarchal modules, the other being '20/21' (Yechezqel-Yakin), also the module for the twenty-first century and its time to move on.

Yaqim means "to lift up" and Chuppah is "a covering". The module is strong on "revelations", that is, whatever is secret or hidden is uncovered or revealed. Bridegrooms and bridal chambers are also associated with it.

Indeed during early April 2020 this author spent the entire '12/13' week making this discovery, half of it on the very, very disturbing 1 Nephi 4. It so reminded him of Yeshuwa's words in John 8:37-44, that is, a murder followed by and garnished with lies and untruths.

Solving 'cold case' crimes is satisfying. Still the quest does not end on Earth. Only Atarian technology is capable of revealing the location of his remains. Once photographic evidence has been obtained, and he has settled in and not before, then he will write and publish his book from the new Earth. Those who believe this is impossible are safe for now.

To be fair, many gay and lesbian believers flock to Christian churches and religiously study the Bible and pray to God for help. Their concerns are genuine. Now there is no need. If one can abide by the Book of Mormon and its church, then one has everything required to make one feel like a saint. One could even argue that by establishing his church, Joseph Smith, Jr., and his friends glorified homosexuality. Perhaps that church should go back to its roots and embrace the wider gay and lesbian community.

What an extraordinary marketing opportunity, though, for its fantastic gospel to revisit the US, where the money and religious freedom are. Joe would be truly proud to have his faith become America's national religion. After all, this was one of his goals. And after America, the world!

P.S. It might be of interest to some that this author’s first name is Wayne. His mother’s maiden name is Jackson. Her parents were English. Quite devout (Congregationalist), she researched and wrote two family histories. Being German his paternal grandparents moved from Orroroo to Stirling North due to local persecution before the end of World War I. His father and brothers were brick makers who mixed red ball clay with white shale and did a lot of wood-cutting for steaming and burning bricks. One could never say his father was a good businessman, yet he knew how to make bricks. He often employed itinerant workers. Making bricks back then was hard work, like digging holes or shafts.

During the 1980s he worked for (Thomas) Elder-Smith-Goldsborough-Mort. At seminary he studied the Hebrew and Greek Scriptures, but no longer belongs to any organised religion. For over two years he lived in barren wilderness at Coober Pedy, where he did some opal mining and was shown and ate bush tucker. Currently he is just under 6’ 2” tall and comes from a family of eight children plus twins who died at birth. Palmyra in Arabia, 133 miles east of Damascus, is where he discovered Sha’uwl (Saul) of Tarsus took refuge and began inventing his false gospel. So the Book of Mormon is not out of character.

Are these mere coincidences? Is it possible that the two web pages published here may be “the Father’s will” and a part of a broader mission in life? Two copies of the Book of Mormon lay on the bottom of a book shelf gathering dust for years, when out of the blue he decided to pick one up for a second attempt to decipher its contents. It took less than a week to get the basic picture. Ever since the evidence has been flooding in (Hebrew zaram). The only Holy Spirit, Yahbeth, is full of surprises. The rest who have no name are deceivers, yet agree with everything one believes regardless.