As for diverting any incoming asteroid using nuclear weapons, that will become impossible since Earth's black lamp is to be switched back on again for a short while.

"And immediately after the affliction of those days the sun will be darkened and the moon not give her light, and the stars will fall from the sky, and the powers of the heavens will be shaken" (Matthew 24:29).

No telescope on Earth or in space will be able to see into or through the blackness. It is black light or dark energy.

This event was originally meant to happen in 76 CE after the destruction of Yeruwshalem and her temple at the end of the age of Yitschaq (Matthew 28:20). The adverbial phrase "immediately after" allows for intervening years.

It did not occur then due to the role Rome under its emperor Nero and procurator Gessius Florus played in the massacre of tens of thousands of Quiet Ones after the aborted exodus to ATAR on November 28, 65 CE. So immediately after is now approaching two thousand years.

For the sake of objectivity one must also identify which energy package is fostering this science. Conservative Christianity’s package is very different from the Muslim. Hinduism and Judaism have their own as do the various Buddhist philosophies.

Again whatever the mind or intellect believes the heart or subconscious will provide all of the convincing evidence so that each believes it is right.

The Muslim package seems to reflect a lot of modern cosmology. Who taught its messenger? Who is behind the Christian understanding? God?

The Big Bang Singularity is an Earth-based theory. So is the belief in an invisible THEOS, God or entity. All religion and science are Earth-based and invented by men without any heavenly perspective.

After reading miracles-of-quran.com it would appear that Islam is making claims to have revealed the big bang origins of the universe 1400 years ago. Of course, it is entitled to do this.

That same web page also dismisses the static or steady state universe of Job 37:18. Thanks for drawing this author's attention to that verse. It is, in fact, correct.

At the start of the "Big Bang & Big Crunch" its author wrote:

"In the Quran the heavens expanded from a single point…

How could an illiterate man who lived 1400 years ago have known that the universe came from a Big Bang?"

Maybe someone accidentally dropped a bowl of sesame seeds ("open sesame") onto the floor, smashing both the bowl and scattering the seed all over the place.

Observing the disheartening scene, a lucky comparison with the night sky followed and so a heavenly big bang thought gelled in his mind. Illiterate people tend to use examples from life and then imagine things.

The Hebrew And Arabic Scriptures

Here the point needs to be made that whatever the Hebrew Scriptures say happened, the Holy Quran seems to deliberately give an account of something similar, yet different.

This suggests the it was written by a rebellious mind, like the letters of Paul and the writings of his companions in the New Testament canon. For example: 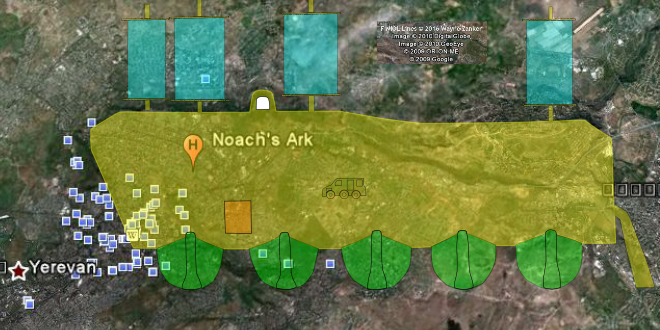 A FIMIOL of Noach's Ark prepared for the controlled universal inundation in 4681 BCE. Members of the Niphla'iym population did most of the building.